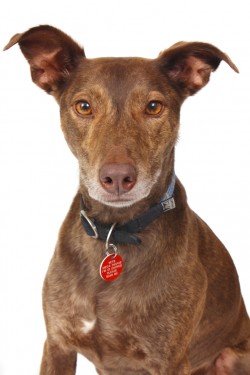 Female dogs
A bitch will normally come into season every six months. She will usually have her first season between the ages of six and twelve months, although there are some exceptions. Each season lasts approximately three weeks. Most dogs will show 7-10 days of light bleeding or “spotting” at the start of a season. During this time the bitch will be attractive to male dogs, but usually she will not show much interest in the male. When the bleeding stops, the female is at her most fertile and will accept a male. This period can last between five and nine days. It is important to keep the bitch under close control and supervision for the full duration of the season to avoid unwanted matings.

We advise that all bitches should be spayed if you do not wish to breed from them. The advantages of spaying are:

The disadvantages of spaying are the small risks associated with any anaesthetic and operation, and an increased incidence of age-related urinary incontinence (which can be treated with medication). There is some early evidence that early neutering  (before puberty) may increase the risk of weight gain, certain joint and internal problems, particularly in large breed dogs. Anxiety issues may be exacerbated by spaying.

The spay operation involves removing the ovaries (and sometimes the womb) under a general anaesthetic. After spaying, the bitch will have no more seasons. In small breed dogs (adult weight expected to be under 15kg), the spay operation can be carried out at 6 months of age, before the first season. In larger breed dogs (adult weight over 15kg) the spay operation is best carried out 2-3 months after the first season. Bitches having traditional spay surgery often stay at the hsopital overnight following the operation, and the stitches are taken out ten days later.

Since September 2019 it has been possible to perform the spay surgery using keyhole surgery (also known as laparoscopy). This has the advantage of very much smaller surgical wounds, and a faster recovery. Bitches having a keyhole spay should not need to stay in the hospital overnight and can return to normal exercise much sooner. There is an additional fee for keyhole surgery.

If you do wish to breed from your bitch, this should be delayed until she has fully matured (from 12-18 months). We do not recommend breeding from dogs which have an aggressive temperament or any illness that may be hereditary. Some dog breed societies have set up screening schemes to check for inherited eye or joint disorders. It is advisable to talk things over with an experienced breeder or veterinary surgeon before breeding from your bitch.

Male dogs can enter puberty between 5 and 10 months of age, depending on breed. We do not recommend routine castration of all male dogs, and prefer to make a decision regarding castration based on each individual dog’s situation.

The benefits of castration are:

Castrated dogs are much less interested in bitches in season. Therefore castration prevents escaping and chasing after bitches in season
Castration reduces mating behaviour and desires, so can be helpful for those dogs that demonstrate mating behaviour on their owners legs or furniture!
In some cases castration can make a dog easier to train, or help to reduce aggression with other dogs. However, no behavioural changes can be guaranteed, and castration will certainly not make a naughty dog into a well behaved dog – only careful training and management will achieve this! For dogs with behavioural problems with a fear or anxiety basis, castration may worsen the problem, therefore we strongly recomend that you speak to a member of staff at the surgery before making your decision.
For dogs with certain medical problems (particularly prostatic problems) castration will be recommended as part of the treatment

The disadvantages of castration are that it is an operation carried out under general anaesthetic, and as with all operations this involves a small risk. Castrated dogs tend to put on weight more easily. Castration is also likely to worsen fearful or anxious behaviour problems.

Our policy is to wait and see how a dog gets on after reaching sexual maturity. If after considering the above points you wish to have your dog castrated, we will be happy to perform the operation after your dog reaches one year of age. Please ask one of the vets or nurses if you would like to discuss your dog’s individual case.

Age of neutering for dogs

There is no clear consensus as to what is the ideal age for male and female dogs to be neutered. If you search the internet for different veterinary policies and published studies investigating the pros and cons of neutering at different ages you will find a vast and conflicting range of opinions! The British Veterinary Association states that there is a clear benefit to spaying bitches, but no clear evidence as to which is the ideal age so this is left to the discretion of individual veterinary practices after discussion with their clients. In the summer of 2015 Acorn House Veterinary Surgery undertook a thorough review of the published evidence considering the medical and behavioural advantages and disadvantages of neutering at different ages. The policies detailed are the result of this review. However, every dog neutered at Acorn House Veterinary Surgery will have an admission appointment on the day of the planned surgery so that the veterinary team can be sure that neutering at that time is the best option for each individual dog. If you would like to see a summary of the evidence that we have based our policies on please contact the surgery.

Female cats usually come into season for the first time when they are approximately six months old. They tend to come into season every few weeks if they are not mated. Cats may become more vocal and roll about on the floor a lot when they are in season – this can be very alarming but is perfectly normal! Most breeding activity occurs between January and August but it is possible for cats to breed all year round. If your cat is not spayed and has started having seasons she is extremely likely to become pregnant if she is allowed outside, even just for short periods!

We very strongly advise that all female cats are spayed unless you wish to breed from them. This prevents unwanted pregnancies, and reduces the risks of transmission of infections such as feline leukaemia virus. The spay operation involves removing the ovaries and womb under a general anaesthetic. After spaying the cat will have no more seasons. The operation can be carried out from 16 weeks of age. If everything is routine, we allow all cats to go home the same day of the operation and the stitches are taken out 10 days later.

If you do wish to breed from your cat we recommend that you wait until she is a year old and fully mature herself. This means that she will need to be kept indoors to prevent pregnancy prior to this. Your cat should be fit and healthy before you breed from her – she should be fully vaccinated, and free from any health problems. It is unwise to breed from cats with an aggressive temperament or any genetic disease. If you are taking your cat to a stud cat, the stud owner may well require her to be blood tested for infectious diseases before mating.

We very strongly recommend that all male cats are neutered unless they are specially kept as stud cats at a breeding establishment. If an entire male cat is kept indoors it is likely that he will begin to spray urine in the house. If an entire male cat is allowed to go outside he is much more likely to fight with other cats, and will tend to roam much further than a castrated male cat. This leads to a high incidence of fight wounds, life-threatening infections such as Feline Leukaemia Virus and Feline Immunodeficiency Virus, and road accidents.

Male cats enter puberty at between 6 and 10 months of age. Castration can be carried out from 16 weeks of age. The castration is carried out under a general anaesthetic, but is a very short procedure and most cats do not need to stay in overnight.

Book An Appointment Online
You can make an appointment, order repeat prescriptions or register online. 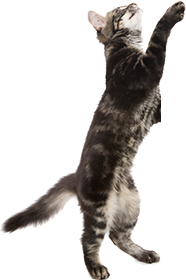